Hope you’ve had a nice week! It’s been a good week here. We’re doing a little challenge called the Cabinet Challenge, where for a whole week you live off what’s in your fridge and pantry except that you can spend up to $25 (or 250 kronor in our case) on fresh foods like milk and juice. Otherwise no purchases! The idea is to save money and eat things before they expire. It’s fun! But tough..

I’ve started on the sewing phase of my quilt. 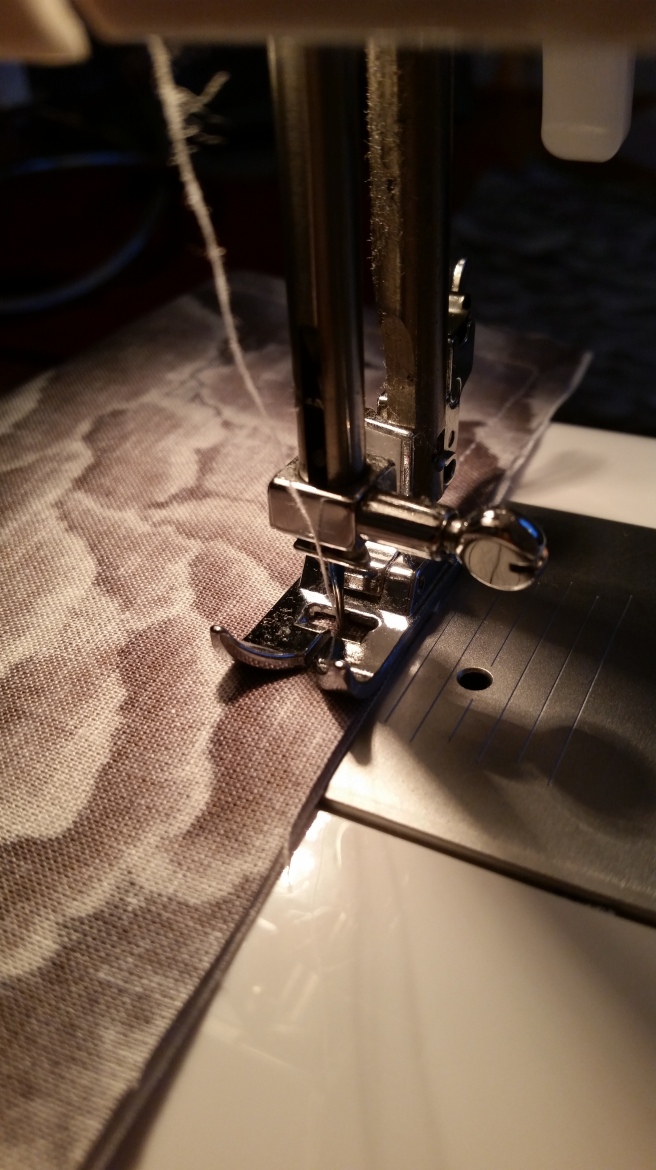 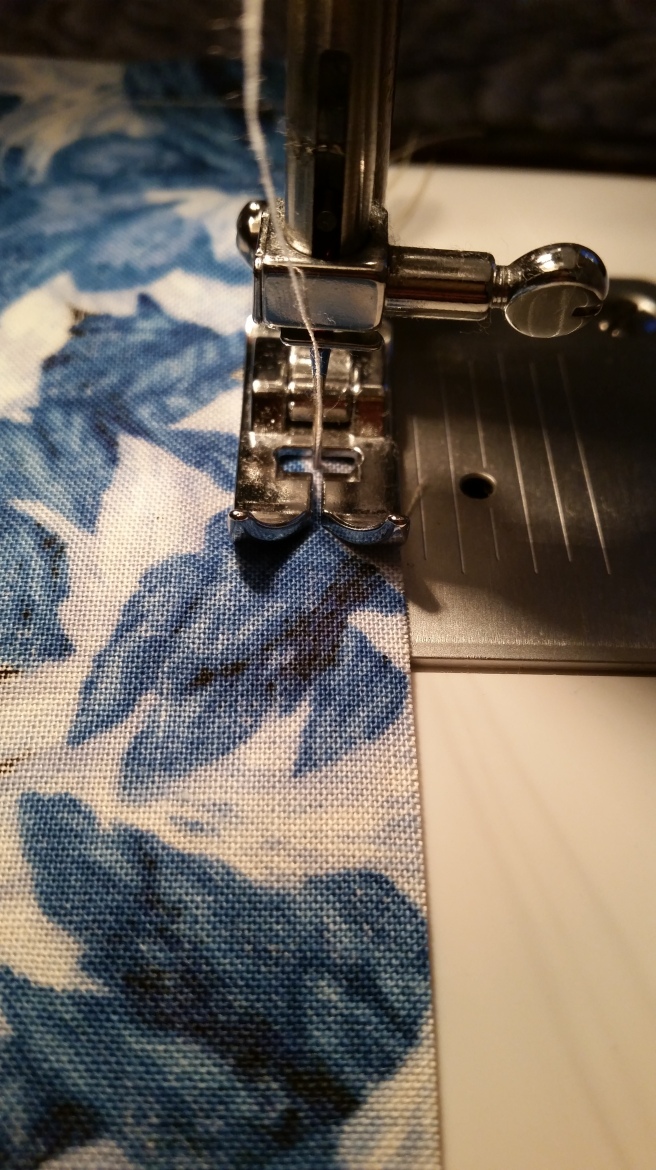 So in the end of this phase, I’ll end up with 50 squares sewn together. 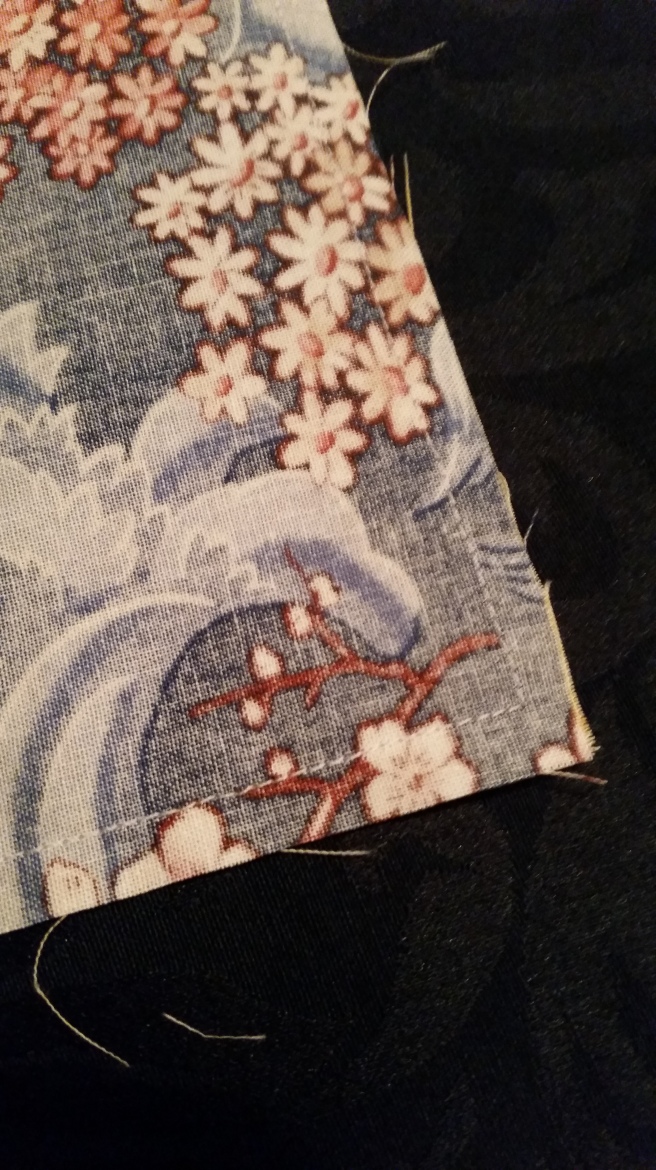 So far, I’ve got about a dozen done. 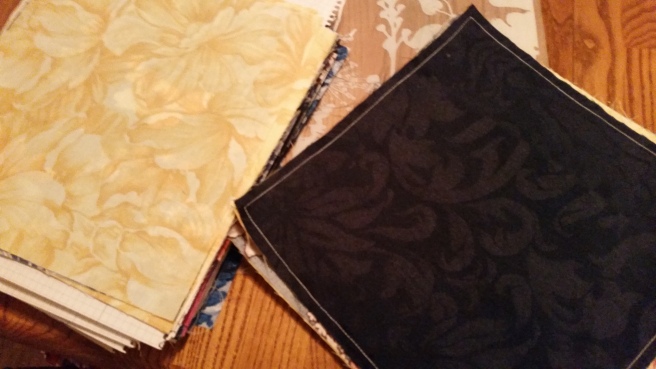 The sewing is the fun part! Love that. Cutting isn’t the greatest ever. Can just be crazy tedious (although the cutting for this project was a cinch.. or sinch.. synch.. however that’s spelled..!). But sewing is so cool. I love sewing machines 🙂 I’ve been curious how they’re actually working, so this week I watched some videos about the mechanics and it also gave a history of sewing machines. That was interesting! I’ll post the link below. 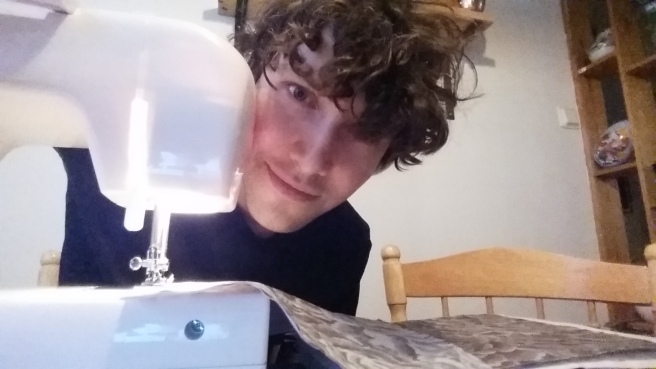 Hope you’ve had a fun week! Time for a movie and candy now 🙂

While Jimmy’s been conquering the Roman Empire, I finished cutting the remaining 44 blocks of my star quilt today. I actually altered the pattern, so it didn’t end up being 44 white blocks like I thought, but instead 32 white blocks and 12 navy blocks. Let’s back up – I didn’t buy any background fabric for this quilt – just planned to use my stash and save on costs 😉 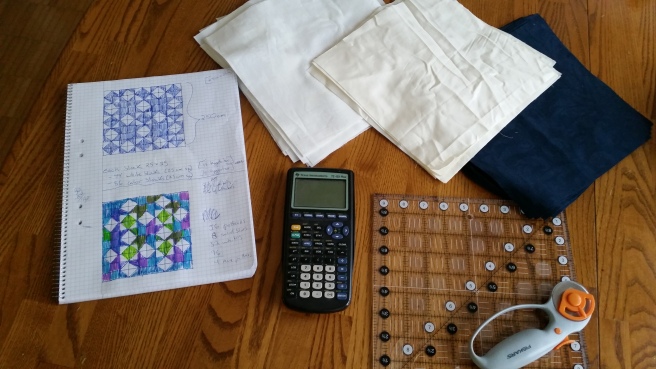 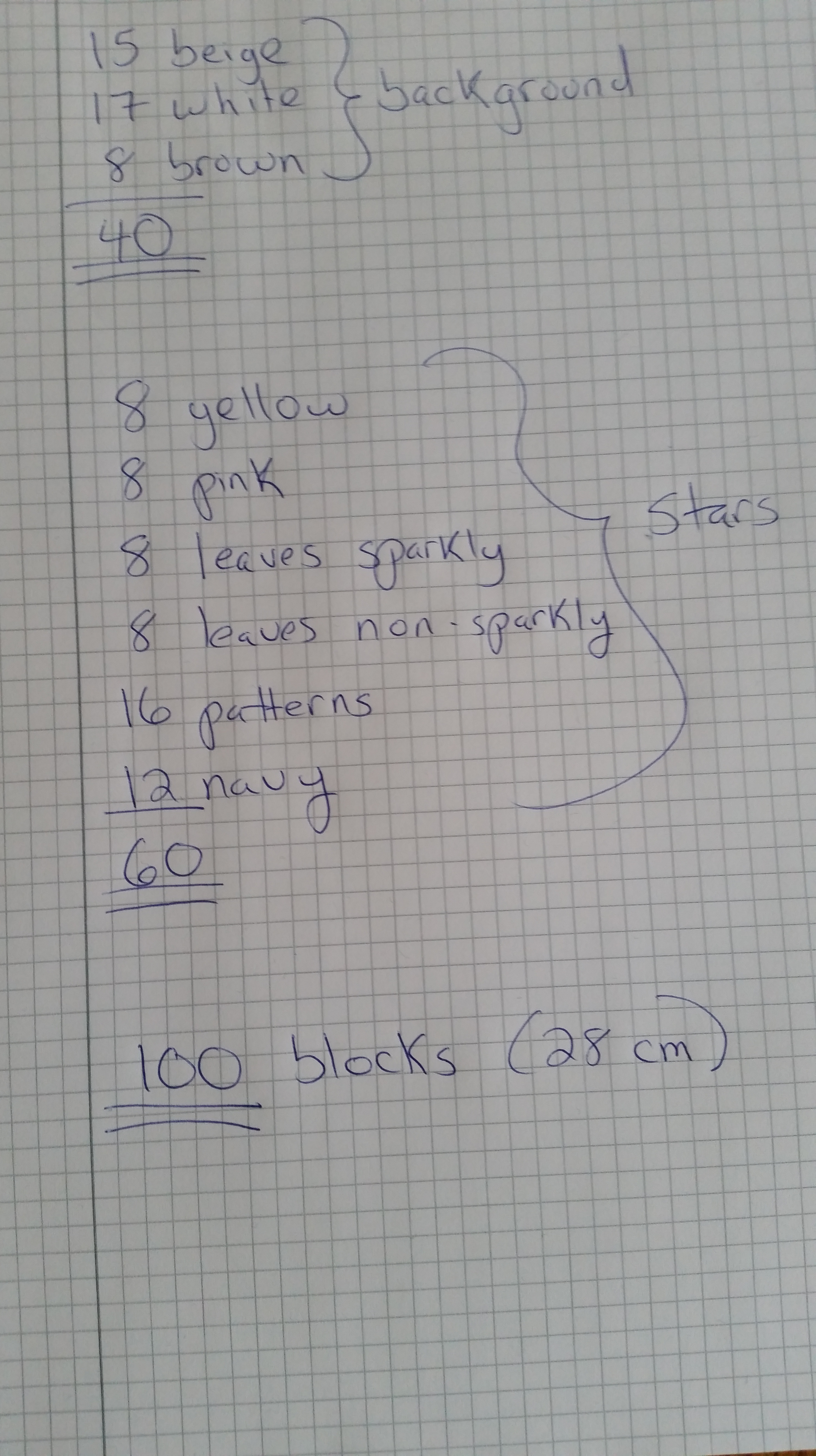 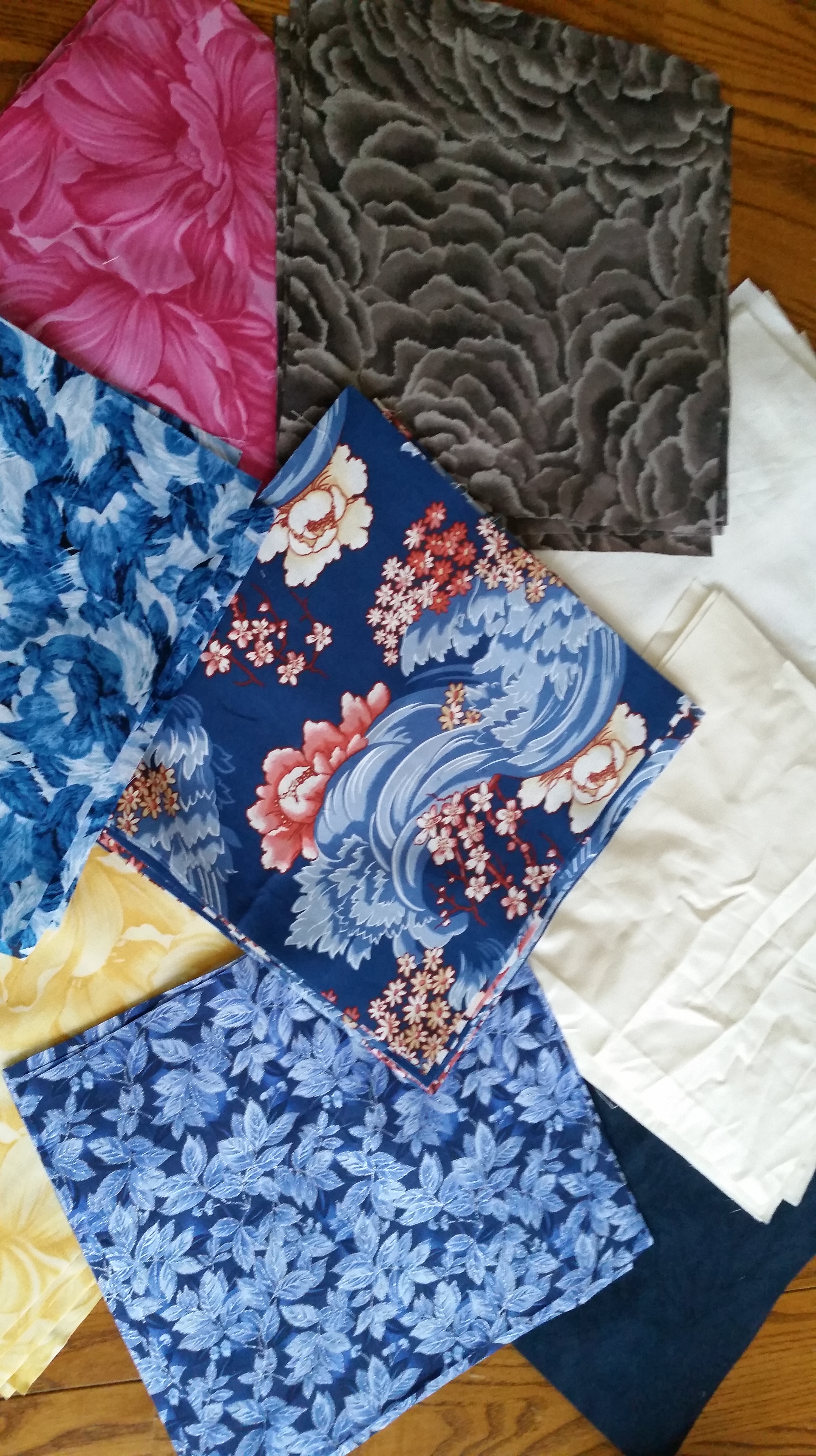 Then I matched them all up against one another, so that I can just sew straight through this stack (another day). I’ll sew two blocks together face down, then slice them each into four triangles. 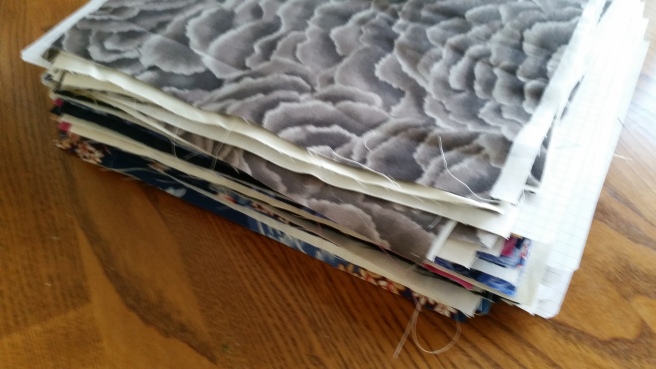 Probably will be another week before I work on this again, so that should give you time to catch up! I think this is gonna be a fast project!

We woke up this morning and made waffles, then went shopping for garden things for the balcony. We visited hmm.. four stores (one of those twice because we found the same things cheaper elsewhere and then returned the originals). Finally we ended up with two trellises, four pots, and some new chairs. Once it’s a tad warmer, we’ll start planting!

This evening I started on my big block star quilt. 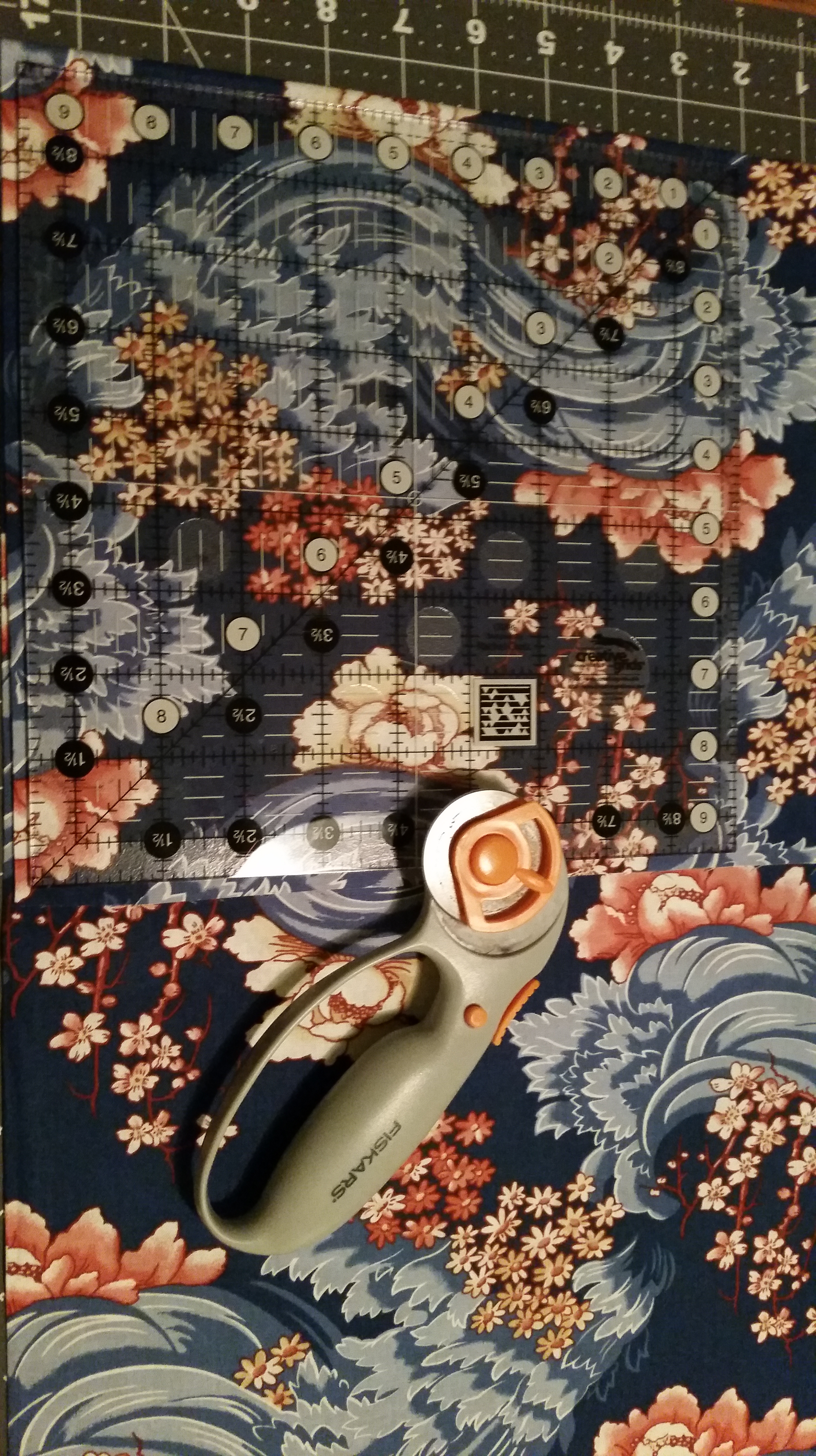 Thanks to my handy dandy rotary cutter, I cut 56 squares in no time! I folded the fabric in order to cut 4 squares at once. 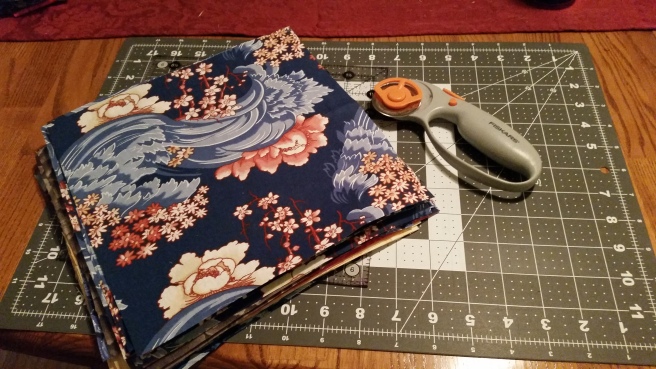 That’s all the patterned pieces I’ll need. All that’s left is to cut 44 white pieces for the background. In the end, that’s 100 squares each 28cm.. which as the project progresses will become 400 pieces (half square triangles). 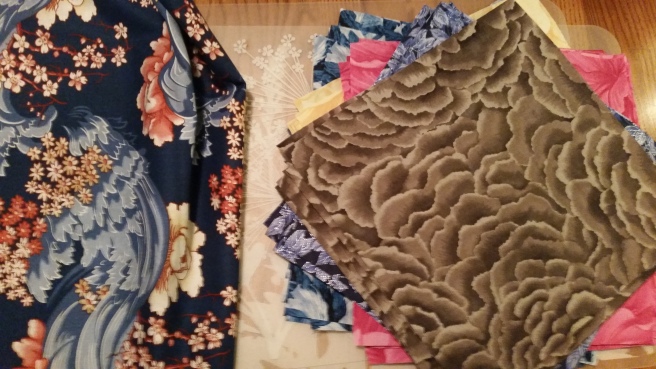 Hope you had a sweet waffle day! 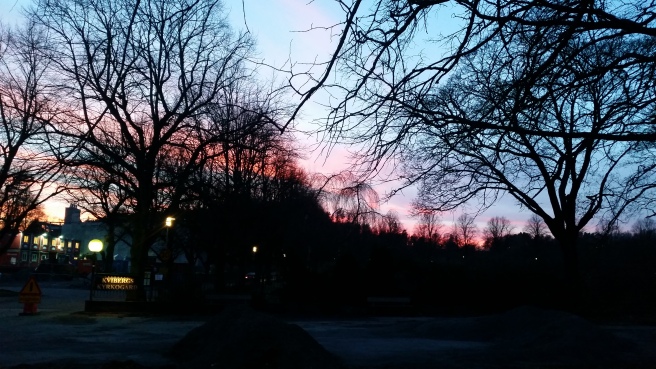 Happy Friday! The time has come to start another quilt. Yippee! After a looong search for fabric (searching through nearly every online fabric store i could find in sweden (and norway incidentally)), I found some I’m really excited about. Actually I put together a really beautiful flowered collection from tyg.se, but it just ended up being super expensive! So all that pondering was wasted.. sadly. A real bummer because those were stunning.

Later I found a site called wahlmantextil.com, and the prices were a lot more reasonable. Although I did end up changing the theme entirely. I found a really awesome kind of asian piece as the main fabric, then picked four monochromatic florals to go along.

This quilt will be for a star-patterned, king-size bedspread.

I’ll try to post updates as I go along! 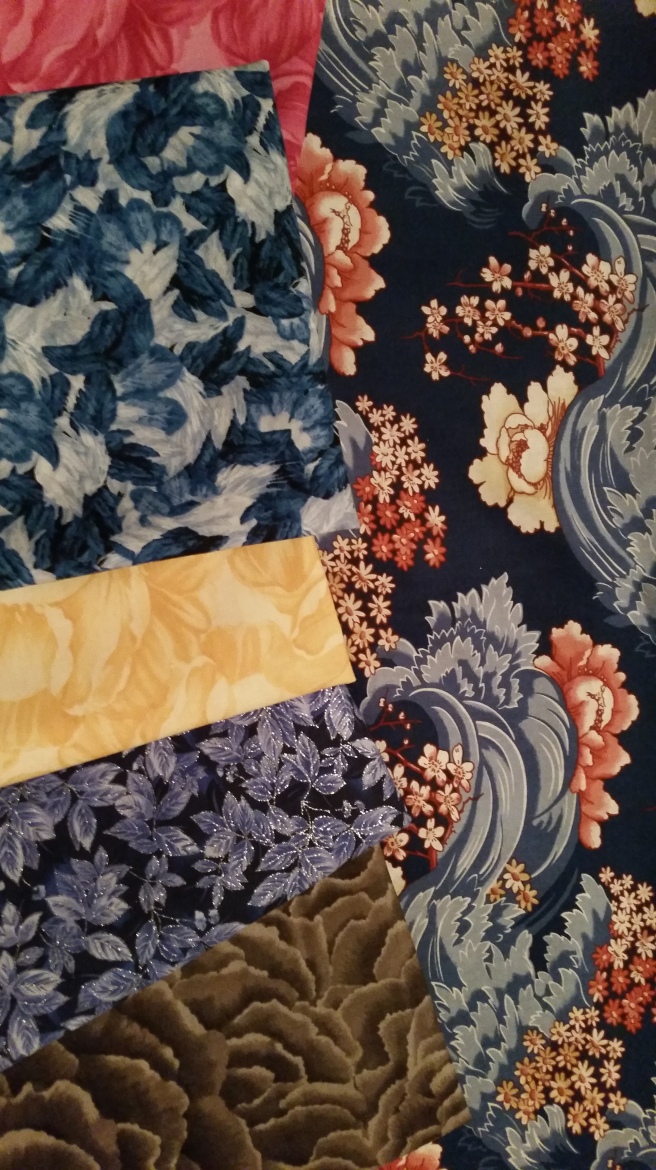 Today’s the first day of spring! It doesn’t really look characteristically springy out – cold & rainy. Although “April showers bring, May flowers.” As the saying goes. It’s still March, but anywho…

It is getting lighter out..! That’s wonderful. Truly wonderful. I have really come to appreciate light since living in Sweden. My first winter or two didn’t have that effect on me – I think because it was so curious and unusal – the darkness. Dark from 4pm to 10am and totally dark on rainy days. But the last winters, I’ve really felt how it affects my energy level and mood. Some days, it’s just like being totally out of gasoline.

I’ve survived another winter though! Time for sunshine and light and flowers and cool breezes and bright colors and short sleeves!! Jimmy and I talked just this morning how nice it will be to just wear short sleeves and take a walk outside. With lush green everywhere! Can’t wait 🙂

It’s so symbolic with light, and there’s so many good things in store for us this spring and summer.

We needed to bring the light inside, too, so recently we visited the fabric store and found something we liked. Then I whipped up some new curtains while Jimmy was busy fighting a gruesome territorial battle and otherwise managing our empire in Civilizations. 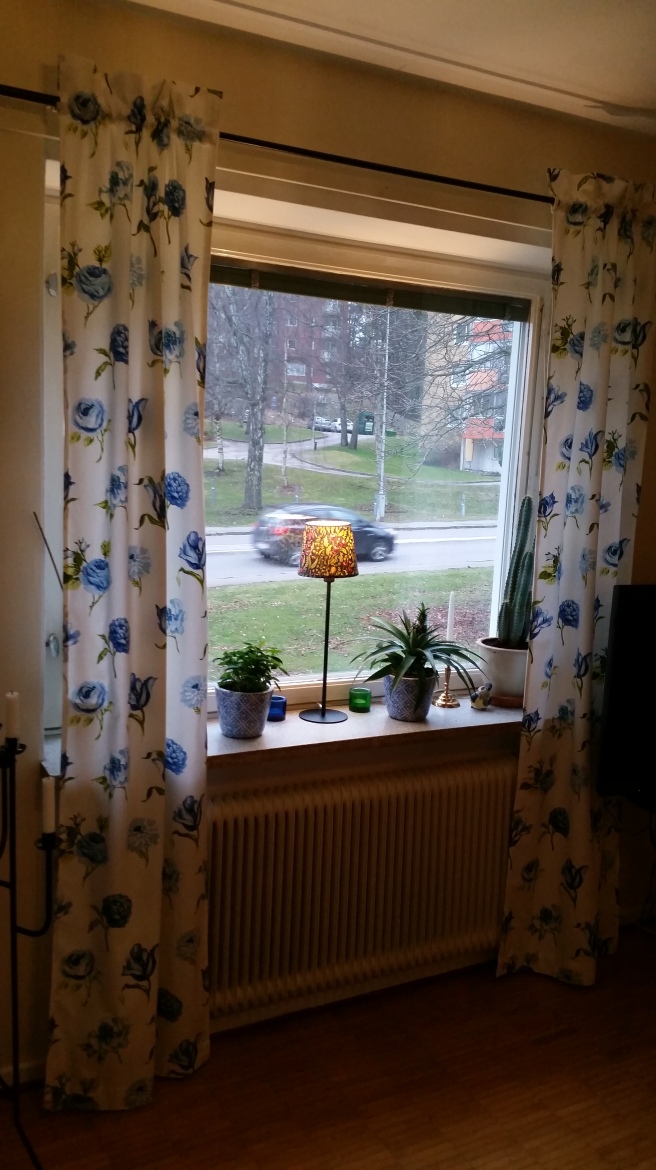 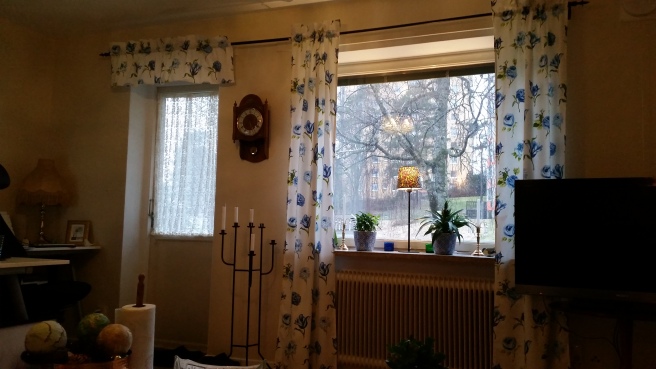 Hope you’re finding light in your own ways, too. Happy Spring, blogosphere

Today we went to visit the reception hall at the church where we’re getting married. Just wanted to see it inside before we booked it. But it was perfect. Just a country looking hall at our country church. We love it there. Couldn’t have been a prettier day to visit than today in the snow: 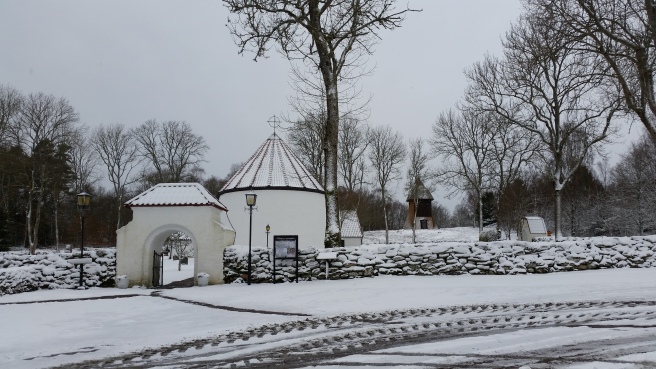 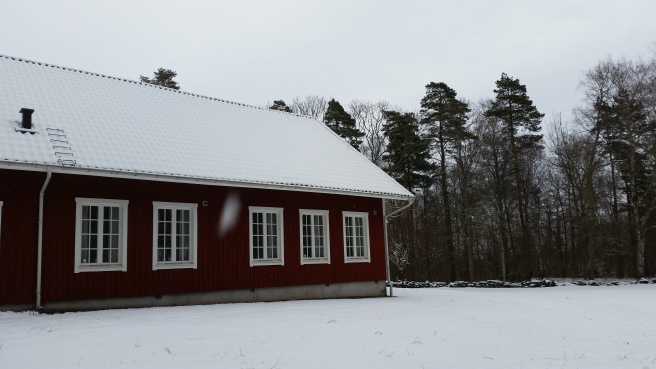 Also… our invitations arrived today! The envelopes were crappy, so we designed and printed our own: 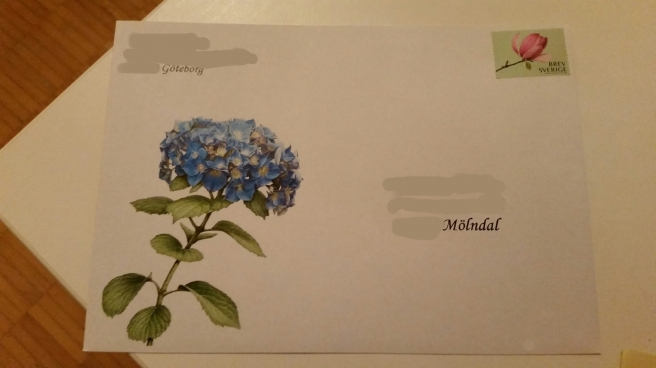 It was a rough week (or rough couple weeks even) and we’ve felt pretty drained. Both work and some ineractions with folks outside of work.

We had homecooked dinners both Friday and Saturday – they say cooking is good for the soul. Jimmy did most of the cooking (although if he was writing this, he would say I did everything 😉 ). 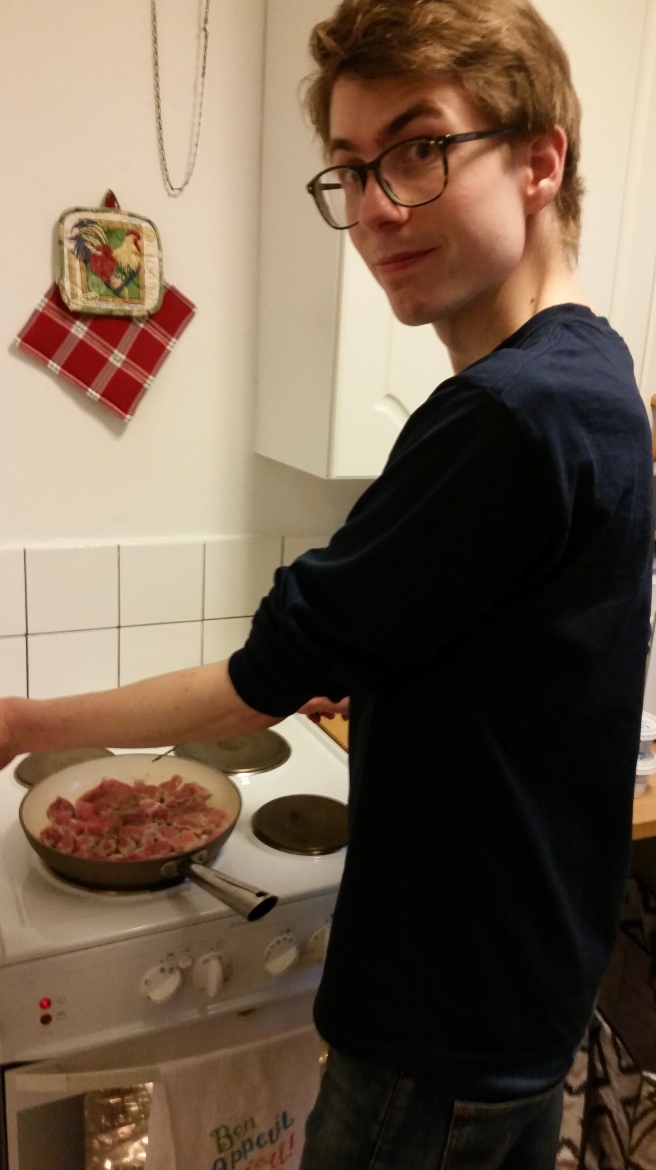 We took a few walks over the weekend, because that always makes us feel better. Nice with some fresh air and a change of environment. And it gets the blood flowing. 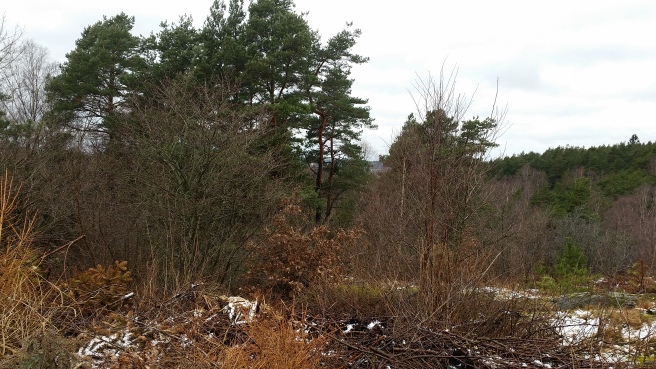 Otherwise, we’ve been making our way through Walking Dead. It’s really fascinating..! I think it could really happen – a zombie apocalypse, I mean. It really makes you think, like am I prepared? We have an “emergency kit,” not specifically in anticipation of a zombocalypse, but moreso because there have been ads sating you need to be able to sustain yourself for 72 hours – water, non-electric radio, water cleansing tablets. I think we also have some julmust and cokes in there just to enjoy ourselves during the crisis. I think it’s actually a good idea, so I’d recommend it, but probably it won’t save you from zombies. 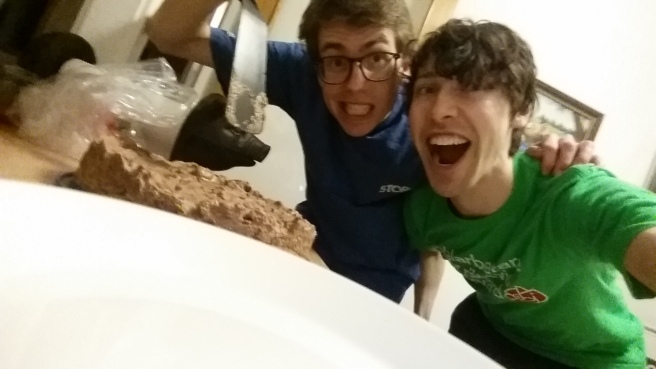 Today, Jimmy is in town for a fika and I’m home trying to pick out fabrics for a big star quilt to use as a bedspread. Quilting requires a lot of simple math calculations, which are actually very complicated when buying fabric. One might not expect. Also i want to share this picture i took below which is from our trip to Frankfurt last week – it won’t be for this quilt, but eventually i’d like to use it as inspiration! 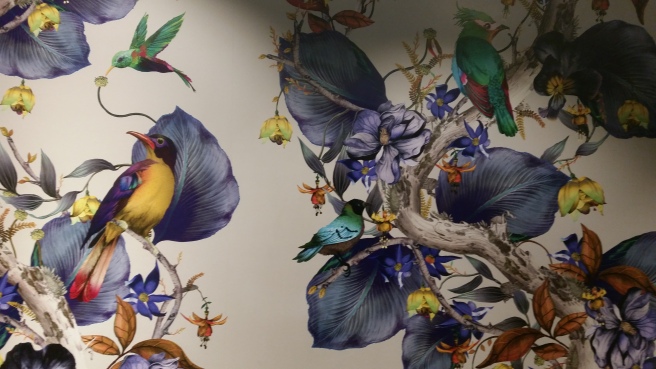